Once upon a time, Sandra and me were making our way around Australia. Not quite literally, because that would've meant using a ship orso... However, we did do so, as close as possible, by buying a cheery old Mitsubishi Pajero, ripping out the back-seats (all the way in the back), putting down the normal back-seats, putting in a DIY bed-frame, some cheap mattresses, crates, etc.. All-in-all, pretty much the perfect way to get around OZ.

We managed to get as far as Canberra, starting in Melbourne, up to Darwin and consequently counter-clockwise around the coast-line. We were gonna end with a bang, the east-coast, unfortunately we didn't make it that far. Our old Pajero had to visit the junk-jard, we had to go home and Sandra had yet to see the east coast of Australia.

Good reason to go back though! As if we really needed one ;) Sandra's finished her degree. I still had some left-over money. Careers were in a state where a couple of months away wasn't going to hurt anybody and there ya go! Sandra didn't have to twist my arm to get excited, KLM was offering some silly discount and after buying the tickets, the dates were set and that more or less concludes the planned part of our trip. A few weeks and an excruciatingly long trip later, we're back!

That of course would be a rather boring post and would also belittle all the effort we've had to put into getting back on the road... First of all, sorry if I offend anybody here, I hate Sydney! Almost as much as I like the Australians generically speaking. While in all our previous travels we've more or less sleep-walked our way through finding a place to sleep, buying/renting a car, getting the kit to travel with said car and getting out of town, Sydney was the counter-balance to our previous experiences. First Hostel was booked solid, second only had a twin left. Fast-forward to the next day, first Hostel is no longer in business (hadn't been for a month), second booked solid, third booked and out of price range, but at least we ended up in the same Hostel I ever spent a night away from home all aone in the world, back in 1998! Well, that is, we got a room with a double, in the building next door, which strictly speaking is the same hostel, but it did hurt the nostalgia a little.

The rest of the Sunday we spent chasing false information. The cabby on the previous night had given us a great location to buy cheap cars! Right across from Ikea no less! At least that was easy enough to find, right? It would have been, if those car-dealers had actually been there, they weren't, or they were hidden quite well, Ikea we found though... So, hop in the public transport and hey, why not hit Kings Cross? Well, because the car-market in Kings Cross isn't quite what it might have been? Or perhaps we were led astray here as well? But, with new information in our pocket, we headed for Paramatta Rd, where there are plenty of car-dealers in the first 5km of the road, orso. Perhaps true if you look at it from the side of Paramatta, not from Sydney though.

Sandra had a great idea! Since Paramatta Rd was confirmed by reliable sources to be a good place for car-shopping, as well as various other suburbs, Sandra easily convinced me that we should hire a car! Simple, yet brilliant and so we set of shopping. Not all that many car-dealers later we ran into a Pajero! Okok, don't get your hopes up, it's out of budget! Or is it?

Some old-school sob-stories later, followed by some dubious but warm-heartidly broken sales talks the car was just slightly out of budget.... It's a Pajero! Damnit! A few generations beyond the original, but probably just as old now as our little Sherman was back then. So, you've guessed it, we've bought ourselves a Pejero again. 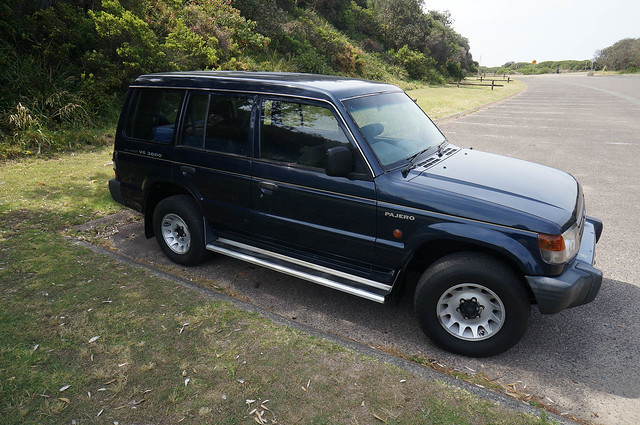 After getting the rental back and the bags in the Pajero, we quickly headed out of town. On the way out spotting a Bunnings Warehouse, good for the wooking planks that were to be the basis of our new bed! A sigle square post cut to length for supports and there ya go. Now all we need is a some mattresses. Not likely tonight. However, the truck-stop is good for sleeping at. And so we spent the night in the back, on some hard wooden planks.

We managed to upgrade our transport to a full backpacker vehicle!! Yes, on the way out of wherever we stranded, we lucked out and spotted a Clarks Rubber! Of course they weren't open yet but a nearby Target was! The Target being good for basic bedding and camping supplies, suplemented by the Clarks Rubber supplying us with affordable mattresses, we really started to feel a lot better. The first requirements of our extended survival are in the pocket. We started driving up the old Pacific Highway and somewhere along the way ran into a little, lesser-known National Park where, after some worried glances at each other we also managed to find a pretty little camp-ground, right on the water. Life's all good again ;) Let's see what the rest of the Journey brings us. 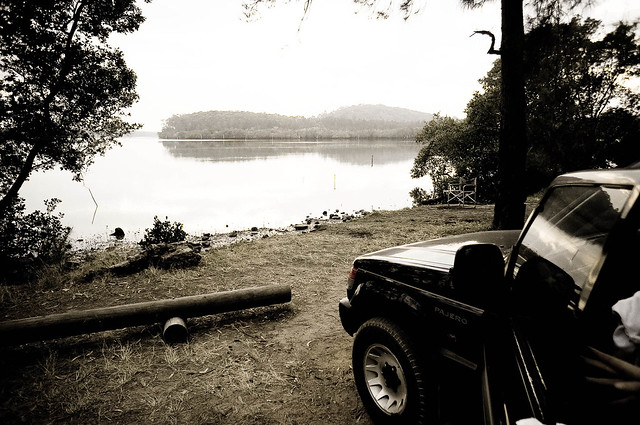