After a little internet time I added a shot from within the lava-tubes towards the exit. That may give you an inkling of what we'd seen there. The experience at Undara was certainly a highlight of our trip so far. At the park we've seen lots of 'macro-pods' and a beautiful sunset from the rim of an old volcano.

After the vulcanic park we made our way towards the tablelands. We found ourselves another nice place to sleep and made ready to go around the tablelands looking for / at plenty of waterfalls.

Amazingly enough the day went by quickly and although it was one of the days where we drove only a little, it did feel like we'd never done as much before. Don't expect me to go of raving about the huge, stunning longest waterfall known to man, that's not what we'd seen that day. Most of the waterfalls were quite beautiful though. Tucked away in the last pieces of rain-forrest that's still clinging on for dear life in this part of Australia.

Little winding roads took us through the grassy fields with some cattle scattered around. Shaded walks through old rain-forrest gave us glimpses of flowing water only to finally open up and give us great views of the waterfalls. Some properties were actually for sale and made us meander about a house tucked away in a patch of rain-forrest to spend the cold winters outside of Europe. Dreaming is fun and easy in such a nice environment!

After all of that we made our way to a close by free camping area. We'd been told it was 'across from the hotel'. And boy was it across from the hotel! We drove into another tiny town, probably some 20 houses tucked together, with a reasonably big hotel on the main-street. On the other side a nice shaded park allowed for 24 hours of camping and even with a free (though cold) shower. Now with the word hotel, realise in places like these that means a pub with accommodation on the second floor...

After both having taken a quick shower, Sandra made first contact with a local across the street and so we ended up having a long chat with him. Some 3 bundi and cokes later, Sandra had had enough and found a polite way to make for bed. Another shot of rum later and having met some more of the locals inside I also stumbled my way back to the tent.

That would've made for a good ending but since some german backpackers had taken possession of the picknick bench right next to the car and I struck up a conversation, Sandra also came back out and we chatted away into the evening. And although at some point we did make it back into bed, the night was far from over. Apparently the local farming backpackers had managed to make some interesting drama happen, of which most of what we picked up was summed up in repetitive uttering of 'Fuck, fucking fuckfuck germans' and 'Abbey, abbey, abbey!!'. Apparently, so we found out the next morning, Abbey's boyfriend had slept around with a german girl.

Although we were still in the tablelands the waterfalls we went of to see the next day both turned out to be in the more dry and arid eucalyptus forrests. And mostly used for their swimming holes by locals trying to get out of the heat. It seems it was time to move on and thats what we did.

While driving up we found more vegetation, although again the more arid eucalyptus kind and it became apparent there was less and less people living in this area. The stunning black mountain that was going to break up the landscape was a little disappointing, but certainly strange... And so we drove onwards and made it to Cooktown. Further north is possible but requires more planning, spare parts and 4 wheel driving experience. 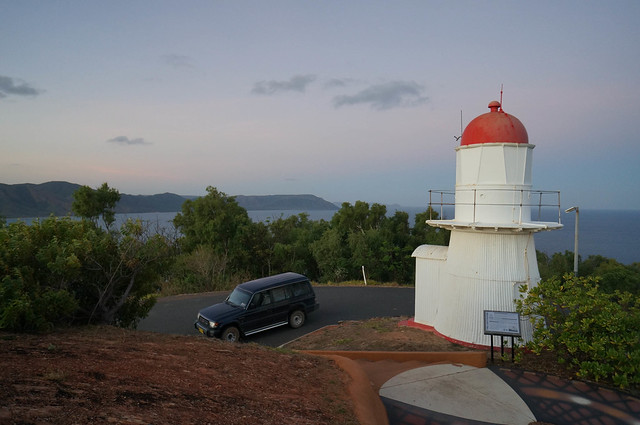 Cooktown, to be fair, is a really lovely town. It's also in a beautiful place. Perhaps if we had arrived on a day when the information center was open, we'd have found ourselves spending more time here. As it was though, we'd taken a lovely walk through the botanic gardens and from there through the forrest onto the beach. From there we swung back onto a road leading us back to our car. Oh we'd also had a drive down to the wharf before this. We finished of our Cooktown experience with sunset at the lighthouse. A stunning view of the surrounding area to be sure!

Not being able to fathom a way to surpass what we'd already seen, we made our way out of town and found a place to spend the night so we'd be able to drive to Port Douglass refreshed and without hitting any of the local wild-life. The next morning we must have seen at least 50 kangaroos and wallabies while driving. We made it to Port Douglass without anything of note happening and that's where we find ourselves today! Next up, our first dive down to the reef!