So, again time as gone by like there's no tomorrow. Here I am struggling to keep you guys updated, and faling sorely! No matter, that is as things are. For those of you who at least want to know I'm still alive and see pretty things in the process, keep up to date with my flickr photo-set as making sure I have my pictures backed up is critically important, I do sometimes burst the best of those onto that photo-album, even if I do not have time to blog... So, on to the journey :)

We finally got around to our first diving trip!! Although it took a lot of heavy consideration to figure out which trip to make, we finally settled on a one day, 3 dives, quick trip out on one of the quicksilver boats. It got us to the 'outer reef' where the diving is supposed to be best!

We've seen quite a few things underwater and it had been a while since we'd been diving. So, it turned out to be a nice relaxing way to get re-acquainted with the water :) The boat was ridiculously luxurious. Big, catamaran style, air-conditioned main lounge and upper deck, all gear set up for our use. All we had to do was put on a shorty, tanks on our back and jump in! There we had a relaxed swim around the reefs, following our dive- master.

Not quite as impressive as the west coast, but good dive even so. I do believe the great barrier reef is being over-exposed as well as over-hyped. It's good diving, for something so accessible, but there's certainly better to be found in the world. Our last dive was a little more of fun dive though, jumping of the moving boat like commandoes, tap on the shoulder, jump in, turn around and give ok then move away from the boat on the double! We saw some sharks on our outing, one of which was resting on the bottom of the ocean (a breed of sharks that doesn't need to move to breath!) and some unfortunate hard swimming against a current to get to the main spot where the boat was anchored. Good times!

Cape tribulation was to be next on the menu and we'd planned to spend a couple of days out on the cape. The main features of cape tribulation are it's age old rain-forrest, mangrove and pristine beaches. 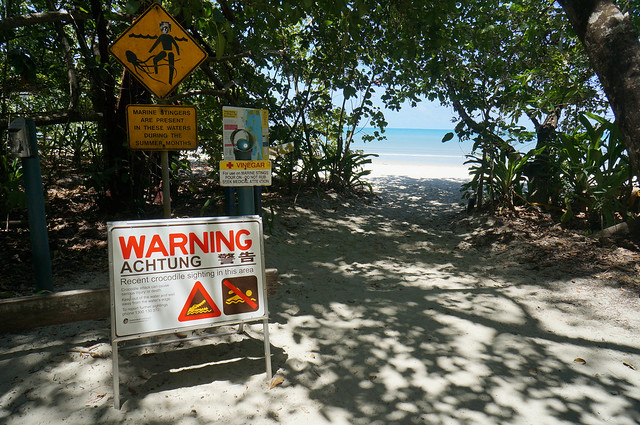 Concerning those beaches, as the picture tells a thousand words... There's a reason they are pristine. If it isn't the stingers that get you, it'll be the crocs! These beaches may be pristine, beautiful, paradise, etc. They also are completely unusable because of the various dangers lurking about.

Anyways, it still all was incredibly pretty and alive. We learned a lot about Mangroves and were even lucky enough to see a Cassowary with three chicks close to the boardwalks we were traversing. It's an odd bird and apparently not so common that everybody gets to see it while travelling the 'far north'. Some late afternoon hunt for a phone-call got us a camp-ground for cheap and we set the alarm-clock for 5:30 to get on the tracks early the next morning.

We were the first on the track up on Mount Sorrow. It was another stark reminder that I'm a little out of shape... But apart from also being the last to get back to the car, due to Sandra almost physically dragging me up the track, it was a beautiful experience. Sandra at some point grabbed a tree for a hand-hold only a split-second later realising that what her hand was on was actually the scaled skin of a "Boyd's Forrest Dragon"! The little dragon shrugged it of like a veteran and allowed us to take plenty of time for some good photo's. That on it's own would've made all my sorrow's worth it, but later we also got ourselves a rather unique show from the lookout. While we'd managed to get into / on top of the clouds, those clouds suddenly opened up to show us a glance of the valley below. It was an almost magical experience and quite likely only better for it.

The next day, with some serious muscle aches we got ourselves educated at "Daintree Discovery Centre", which was honestly a really good experience. Better than doing the touristy Crocodile tour, in which we didn't actually get to see any crocs :( I know these trips don't come with a guarantee, but it was still disappointing.

So on our way to Cairn we went up to Kuranda. We actually went there to go have a look at the "Barron Falls" but, although we also went to look at the falls, ended up spending a few hours walking around this touristy, but not over the top so, town. The atmosphere of the town was just so relaxed and the shops not too terrible either.

Cairns itself I can be relatively short about. It's a lovely town. Not too big, not too small. Like most bigger towns in Australia quite planned out. Special features should include the big public swimming pool on the esplanade as well as various fitness equipment and a running track. All of this available for free, no excuse not to be fit when living in Cairns!

What came next was a fun and incredibly touristy white-water rafter trip down the Tully river. Don't get me wrong, we had heaps of fun. But on the other hand, there were a total of 11 boats going down the river together. Part of this was that some of the boats would stop at the start of a big rapid so that the guide could go ashore and supply safety lines to people falling out of the rafts. No biggy, but then it did mean a lot of waiting.

The trip was also incredibly lazy. On previous experiences we'd had much more peddling and other action needs to help the guide get the raft down the river. Here we were pretty much limited to forward, backward, get down. It did feel a little like cheating. Altogether, a good enjoying day on the river, not entirely sure it was worth the price of admission, but close enough I suppose.

A bit of a drive and getting ready to wake up early, this is what got us quickly down to Townsville, or close to it at least. We found ourselves another nice free camping spot. With even toilets and really officially a camping spot, just with a 48 hour limit.

Townsville still isn't worth much to a traveller except those that do diving. Straight to the harbour and checking in with our boat, the "Adrenalin". The big dive of Australia was about to set of! A quick stop at nearby Magnetic Island and our boat dove into the choppy waters on our 3 hour trip outside the Great Barrier reef to the location of the "S.S. Yongala". 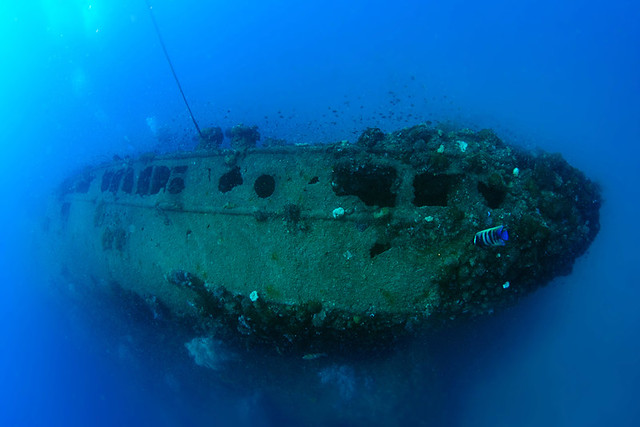 I looked up what I wrote in my dive-logs the first time I went diving at this most stunning of dive-sites, it said "too beautiful to describe in words". I would leave it at that, but I figure you should at least get some idea...

We started out on a choppy ocean, with Sandra quite unwell because of motion sickness. The solution is quite simple, get to 5m below ASAP. The mouth-piece of my main regulator had come lose while swimming out to the guide-lines so we quickly decided I would go down on the secondary, knowing that in a pinch I'd still be able to use the main.

Five meters down, the initial rush is over, the quiet of being underwater takes over. All we hear is our own breath and bubbles and the blue waters of the ocean is all we see around us while below the contours of a ship slowly start showing themselves through the haze. Visibility is close to 20 meters and soon details start filling in. The ship is covered in coral and life! So much life! This is what people expect when coming out to the reef. School of fish, sea snakes, turtles, rays, huge groupers.

We slowly made our way to the stern of the ship taking in the sights as best we could. We must've seen at least 10 olive sea snakes along the way. And then, halfway down the ship, Sandra spots a big sea turtle, asleep in a little nook. It actually stirs from sleep and comes up slowly, moving across the wreck, on it's way to the surface to get a breath of air. So beautiful and we can take our time too, nobody else is waiting for us, just the two of us, since there's no way to get lost out here we didn't even need a dive-master around. We saw much more, took closer looks at the wreck here and there, but this should at least give you some idea of what diving out there is like.