After some heavy travelling. That is, floating down a river, taking a boat out beyond the reefs and doing some serious diving, we then drove quite a distance to arrive in Airlie Beach. We no had a decision to make, would we, or would we not use our money to go sailing around the Whitsundays. We had a hard time deciding, mostly because we both felt we'd rather use that money for diving later on...

So, instead we met up with some girls from Bermuda, whom we'd met before on a campground in Cairns. We had a few drinks, played some pool and still weren't able to figure out a solution to our dilemma. Sandra did do some beauty things, you know, lady stuff and we found a rum bar. We also found out about a relatively cheap way to see the Whitsundays. A scenic flight would give us a quick and alternate view of these islands, at a price we could well afford! 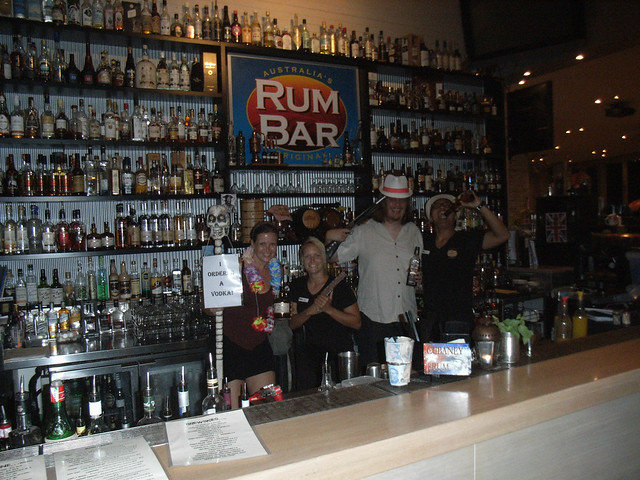 So, yes, the rum bar! Since Sandra had done her beauty things, I figured I should use a similar amount of money on rum :) Fair deal, right? Wrong! I got the better out of this deal, by far. The rum bar had loads of rum, as you can see in the picture. They also sported a wide variety of cocktails and, certainly not least, a great staff! Teddy spent probably the better part of an hour (I got a little tipsy... time is a fluid concept!) educating me on the rum. I learned much, drank a few and even Sandra was able to enjoy our time at the Rum Bar.

Sufface to say, I thought it a day well spent and went to bed quite happily intoxicated. The next morning getting up wasn't even that much of a deal and we had ourselves an awesome flight! If you can spot the turtles, let me know ;) It's an angle we don't usually get and a great way to get a feel for the size of them in comparison to a catamaran.

And so we left the Whitsundays and traveled onwards, to spend another evening somewhere out there, near the highway, well away from the cities.

Next up were some nice caves. The Australians have, quite originally, decided to call the town "the Caves"... Seriously, that's not even a strange name around these parts. Anyways, out there they have something called "Cathedral Cave", a well-named cave, with acoustics I think quite a bit better than your average Cathedral. The cave is quite dry compared to what us tourists usually get to see, but it was still quite fun to see. We also had a high number of bats flitting around the entrance, and later in the Cathedral. That didn't quite prepare us for the grande finale. At the end the guide left us to do a short and safe little "spelunking". Just a twisting and narrow exit at the face of it. But then I heard the bats. Thinking them still asleep and wanted to get the sound recorded I started my camera. Turning the corner to Sandra showed me just how asleep those bats really were!

If you've watched the movie clip you'll realise that Sandra and I were seriously excited about this turn of events. You don't often get to walk through a swarm of bats after all! And this was just the start of the day.

We ended the day in a similar style. Although by now the night had fallen and we were actually looking for the wild-life. At Mon Repos we went out with a ranger and a group of about 30 to find a turtle laying eggs on the beach. It was both shocking to see how much they got away with with the turtle and amazing to see live. These creatures, if I'm not mistaken, pre-date humanity by far and still roam the oceans. Although we've almost succeeded in killing them all, it appears we might still be in time and the efforts of the people we visited is surely having a huge and positive impact on the turtle population. 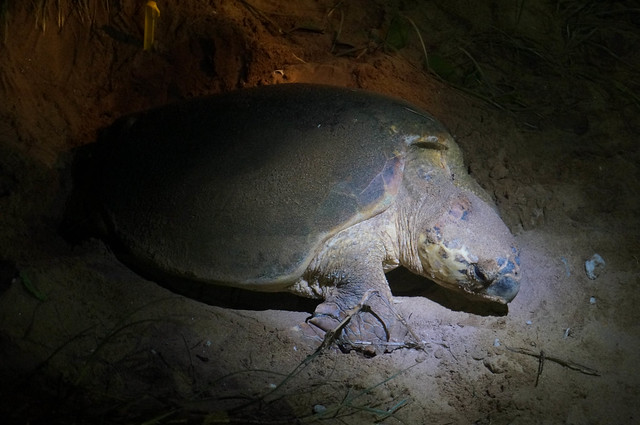 It was a great thing to see this creature live her live. Coming out of the water, digging an egg chamber, delivering the eggs, closing it all up and moving out to the ocean again. What an ending to this day.

What must I say, to me there was only one reason to go to Bundaberg. It was a pilgrimage of sorts. To be fair, Teddy had on numerous occasions looked me deep in the eyes and exclaimed "Stop drinking Bundy Red!", but that did not deter me. 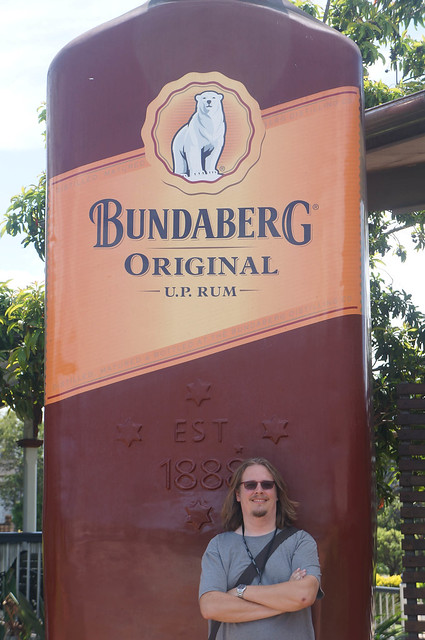 It was a fun experience to have a tour around the Bundaberg distillery. Learning a bit about both the history as well as the process behind the rum. To finish in the bar and have a few tasted of the different end-products felt both good and wrong at the same time. The good being the nice rum, the bad being drinking on an empty stomach around lunch-time. But hey, good times! Now to figure out how to get the rum back home ;)