After a hard two days of a lot of powerpoints and alcohol, I managed to find my way to Padborg. While Sandra was being waylaid by heavy traffic all throughout Germany, I simply hopped on a train, with one quick stop-over in Fredericia. The Danish railways being quite efficient on a lazy Sunday meant that I got there in no time at all and spent my time reading, checking my phone, and more reading...

We soon found ourselves a suitable spot to sleep and got to it. The van turns out quite well insulated, so it wasn't too cold until near day-break. Everything was working well so far, apart from perhaps some snoring on my side and/or coughing from Sandra's.

We next found ourselves drawn to the west-coast. There was some reasoning involved, but suffice to say, we decided to follow the coast, clock-wise, around the main-land first. We made our way to Reebe (pronounce Ree-buh, sort of...). Reebe is one of Denmarks oldest towns. Of interrest mainly due to the fact that somebody has had the foresight to start an active preservation group somewhere in the mid 1800's! The result is a beautiful Cathedral surrounded by a quaint little town-centre, almost like walking back into time.

Having arrived we found a parking-spot which, in a totally confusing way, tried to explain that you could park your camper for up to 48 hours, but camping was not allowed! Toilets, drinking water and even chemical toilet disposal all available, for free... Strange enough to note that this confusion leads to people being convinced that you can actually sleep in your camper at this parking, we went with the majority vote on this one. 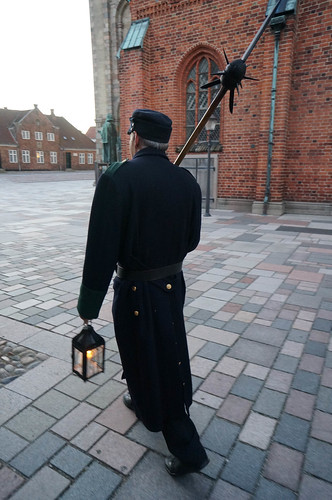 Having secured ourselves a place to sleep we went into town to enjoy the last rays of the sun and get a feel of this town. We ended up having tea at the town-square while awaiting the arrival of the night's watch man, no kidding. This post was re-established some decades ago, specifically to inform interested people about the history of the town. As such, we found ourselves with a reasonably large group of tourists walking around the old town, following a man carrying a morning-star and getting informed about some of the town history. Quite a nice way to spend the evening!

The next day we visited the old Cathedral and were treated to some beautiful gothic choir, a practice-session for a concert that was to be given later that day. Following this nice treat we made our way up the tower for a nice view of the town and surroundings before setting our sights north-bound.

The next few days were spent traveling through dune and tundra-like landscapes. What became apparent is that this part of Denmark has an abundance of Churches, Dunes and Windmills. I'm not talking about the old-school windmills, but rather the modern power generating kind. This is not to say that we saw nothing else, we had reason to be where we were traveling, but I must leave some of it to a actual telling or I'd have nothing to talk about when I get back home! 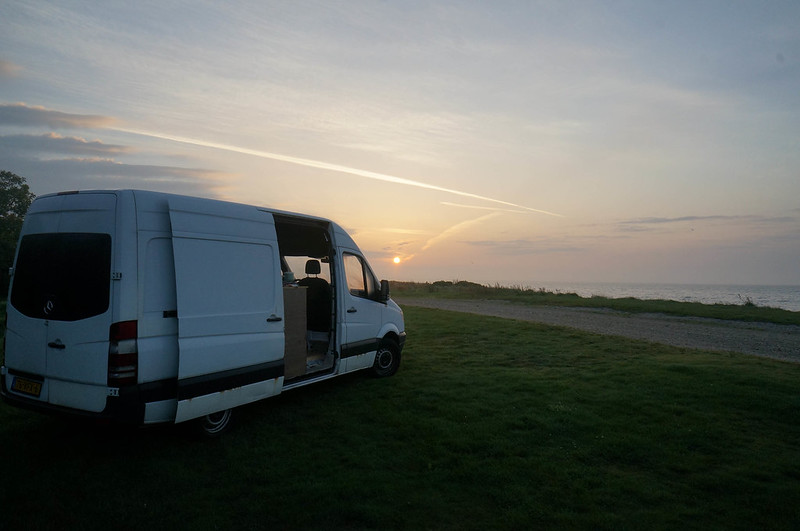 The highlights, in short were: A light-house on the edge of having the ground swept from under it. A magnificent sea-food lunch in Skagen. And a bit of desert in the middle of a green and lively patch of Denmark.

Of note are some of the Danish traits though. While we've been struggling with directions, they don't seem to be interested in telling you where to go, rather they only let you know you've managed to pick the right exit afterwards. Or sometimes they point you in the general direction and then just assume you'll be able to find your way from there... But, not all is bad in Denmark. For instance we've found their public restrooms to be of quite a good quality and on top of that, unreasonably clean for such a public service. Which indeed makes it that much easier to travel with a camper-van. And finally, population density allows us to easily get to towns with an information centre, which then provides wifi access, thus allowing us to us the internet to find ourselves cheap (or even free) parking for the night. Knowing where to be is essential since only commercial sites are reasonably sign-posted. Even the occasional Harbour sites are difficult to find, regardless of their commercial nature.

As we've hit the far north, now we're making our way back down and will soon be doing more modern-day things, like visiting Aarhus museums, amusement parks and possibly even a zoo! But more on that, once we've actually done the deeds.