Making our ways back from the 'far north' we started immersing ourselves into the Viking stories and archeological sites. We did not pace ourselves on this part of the trip, we went headlong into some hiking, and strenuous reading ;). But how does one condense yet another week of traveling into something short and enjoyable to read?

We started our track back down the east coast of the mainland by visiting a site holding the corpse of a 2500 year old, unsolved, murder-case! That might make it sound a whole lot more exciting than reality, but the corpse, none-the-less, is pretty damn old and quite well-preserved, thank you peat bogs. 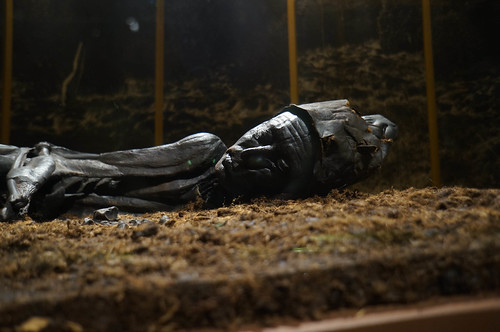 While leaving this old man behind us we then went for something quite the opposite and spent some long hours meandering around the hills of a nature preserve. Some interresting background is that this particular preserve was created around a piece of land that was donated to the state of Denmark with the express rules that the plot would retain it's natural state and that American holidays would be respected (and perhaps even celebrated) on this land. The state decided to add some extra hectares to the plot and the best I can describe the result to dutch people is that it's kind of like the 'Amsterdame Bos', only with a lot of hills, and slightly different vegetation.

I know, chronologically, after this walk-about, we visited a zoo, might have been a day between that I can't quite recall. However, the zoo was quite memorable. From the very start of our finding the zoo, everything about it would stick you. The entrance was quite anti-climactic, in that it was a simple wooden entrance post, followed by grassy parking spots. We could've easily snuck our way in by climbing a fence, but decided to go through the little shop/entrance.

The zoo in question, does not have all that many animals, only some 20 odd species. Again quite easy to recall this zoo however due to it sticking to a simple theme, the Nordics. Being in Denmark this made it easy to create suitable habitats. Also space is not much of an issue in this part of Denmark and result is an almost nature-like zoo, where you can see the animals are in their element.

An often lamented issue with a zoo is how hard it is to spot certain animals. Even this was taken care of. All we had to do was follow the staff on their leisurely feeding rounds and the animals would happily show their faces to us... 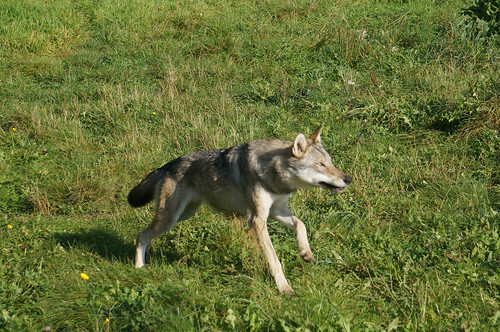 We're both quite fond of wolves, hence the picture of the first animals we'd see. However, the amount of pictures I took of the wolves, pales in comparison with those of the bears. I'll have to show you some of those picture when I get back and have had the time to fully sort them...

We ended this day by driving down to an old light-house. We've spent many nights on spots where we were legally allowed to freely park our camper-van. Most do not bear mentioning, this one however cannot be left without a few words. 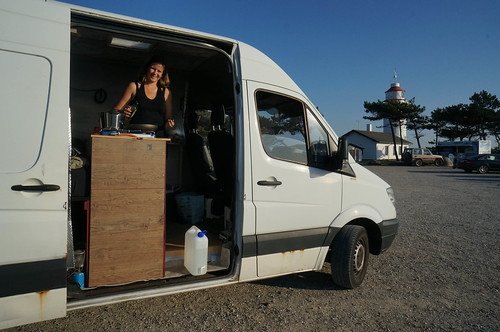 The spot in its self was quite magical. At the end of a relatively unvisited peninsula, you'll find yourself at a light-house overlooking a major ferry route. Across the bay you can spot the harbour of Aarhus and as the sun sets behind the city, slowly the twinkling lights of the city become faint dots on the horizon.

By this time any day-time visitors have long since left and gone home. Now there's only some camper-vans with friendly people. Oh, and then I even forgot to mention that near sunset, in the shallow water near the beach, the Harbour Porpoise (Bruinvis) come out and play, or more likely eat.

We did not spend much time at Aarhus the next day. Although we thoroughly enjoyed their Art museum, ARoS. Although the hinted Dante's ascension from hell to heaven was quite disappointingly far fetched, we enjoyed all the exhibits above the cellar level.

The next few days we dove into the old days and visited some archeological sites detailing some viking related 'stuff'. The first of which being an old burial site, where a king had been burried in his old viking ship, along with some horses, dogs, treasure, weapons, you know, stuff you'll need in the after-life... 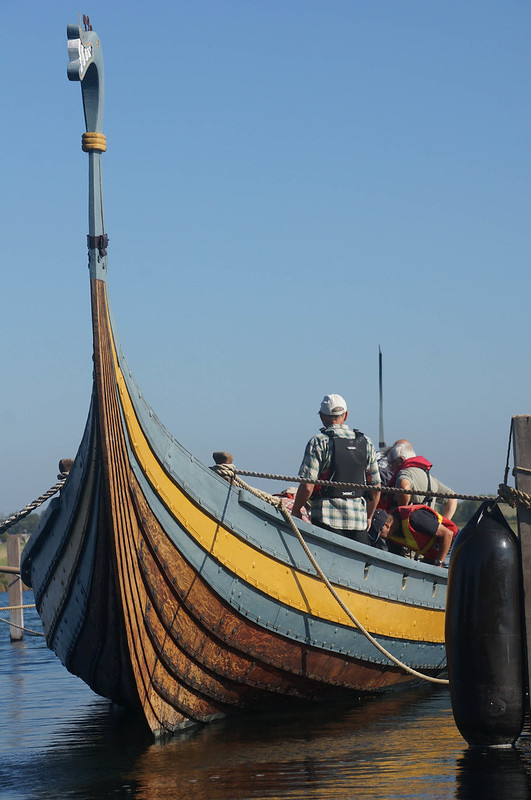 As a hobby some of the locals took a few years of planning to slowly but surely create an authentic replica of the ship, as you may have guessed from the picture, they're finished and it floats! Quite an impressive feat and possibly an even more impressive sight.

Somewhere along the way we crossed a bridge worth mentioning. This particular bridge is 18km long.... And we read somewhere, the highest building in Denmark :) Fancy that! Anyways, it took a while to cross, it was big, mind-boggling and quite an engineering marvel.

This took us to the 'big island'. Where Kopenhagen is to be found, from where you could cross another mention worthy bridge to sweden, but that's for later, we first went to visit a ring fortress.

Trust me when I say, the picture doesn't quite, paint the picture. First, the scale will be lost on you, at least click on it to have a look at a larger version. But even then I doubt you'll be able to fathom the magnificence of this fortress. Even back in the Viking days, people were quite smart in what they did. And the scale at which they manufactured this fortification, combined with a planned interior of four long-houses in perfect alignment. I was seriously impressed with this whole endeavour and will save the story for the interested people to tell you in person :)

Finally the last day I want to tell you about before closing this post (and before we enter Kopenhagen) we set out early, after having spent the night with an older lady who was self-sufficiently living with goats, cats, gardens and a nice patch to park the van (she even gave us some eggs and tomatoes to go!). Sandra had a beautiful plan for the entire day, which was thrown out the window as soon as we ran into a park-ranger on our morning hike.

The ranger in question told us a lot about the forrest we had entered. While we were there to have a look at some 'twisted trees', it turned out this forrest had much significance. The forrest had been created to stop a migrating Dune from taking more villages and as a result, under the sand history was preserved. And on top of the sand an out-of-place pine forrest was to be found. After a good talk, we still did the originally planned 2 hour hike, although we missed a few turns here and there and may have spent a little more time hiking.

Nevermind that though, we made it back to the van and travelled onwards. We then spent the rest of the day at two rather unique and different castles. First we visited 'Kronborg', which some may know as the castle in which Shakespeare's 'Hamlet' was to have taken place. Subsequently we visited 'Fredriksborg', which was much more opulent, Sandra at some point even mentioned that she felt like we'd ended up in Versaille! Both had there strong points and both were beautiful. We went from the lost past of the Vikings to the well-documented, much painted culture of the near-past of Denmark.

I must admit though, at the latter castle I was looking more at the spectacular ceilings than I was looking at the exhibited paintings and such. But the following marvel that I leave you with did quite draw my attention: 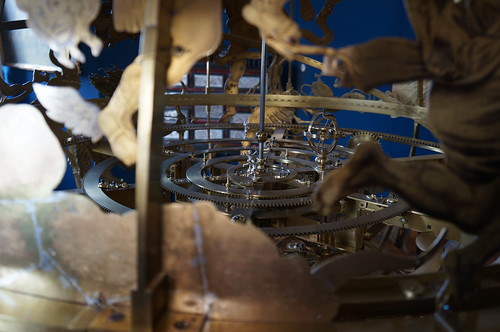 For those of you who want pictures and not words, some pictures are of course used to highlight moments in this blog, but more of them may be found on my Denmark 2016 album at Flickr.